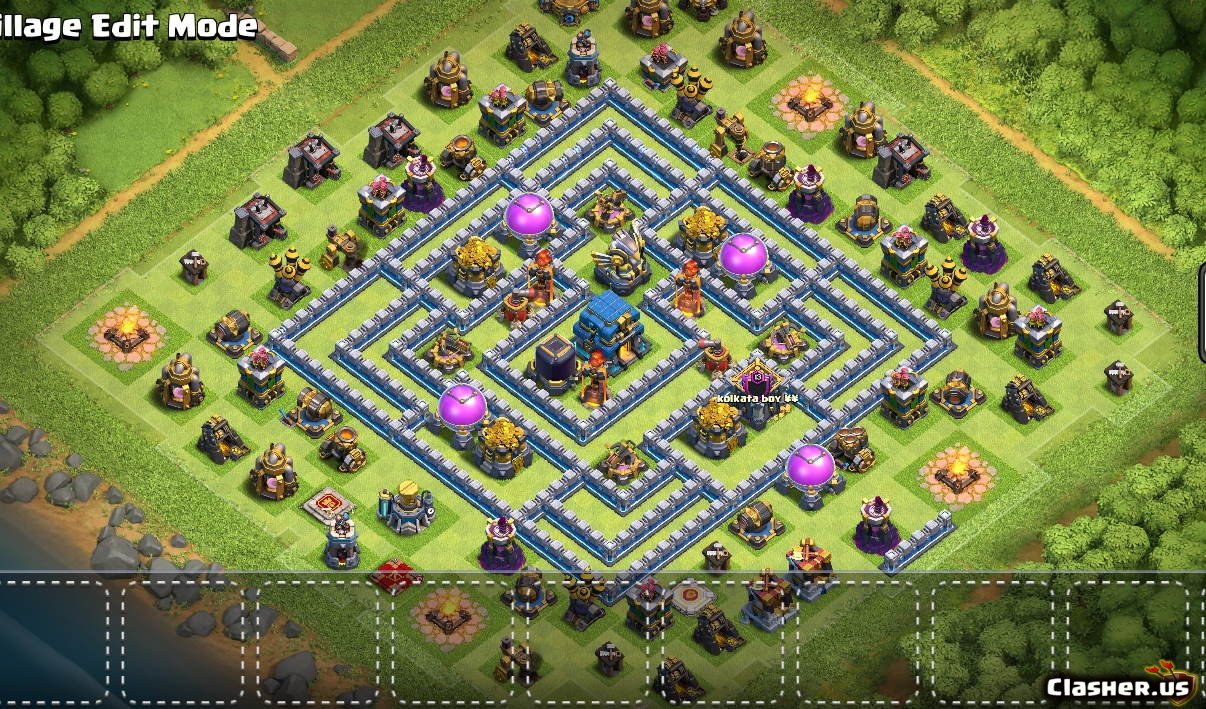 This base anti Troops 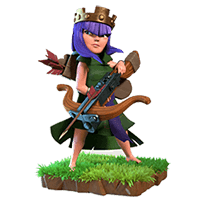 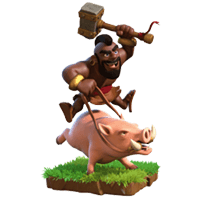 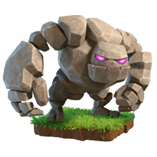 Heroes must be level 15 and above. But can be done with lower level heroes as long as you face a base with similar strength as yours considering you're new to TH9. Minimum Troop Housing Space Required: 220 (Golem in the Clan Castle) Troop and Spell Type Quantity Min Lvl Housing Cost Goblins 1 4 1 80 Elixir Wall Breakers 4 5 8 12,000 Elixir Wizards 5 5 20 17,500 Elixir Healers 4 4 56 40,000 Elixir Hog Riders 21 4 105 1,218 Dark elixir Golems 2 3 60 1,200 Dark elixir Healing Spells 2 5 4 42,000 Elixir Rage Spells 1 5 2 33,000 Elixir Jump Spells 1 2 2 27,000 Elixir Totals - - 250+8
2,418 Dark elixir 171,580 Elixir Execution:
Drop the Archer Queen on a position where she's a bit far from the enemy Queen and Clan Castle and support her with the Healers. Make sure that the Clan castle cannot be triggered by your Queen. When reaching an area where there are more than 3 point defenses, enemy Queen and CC troops can be successfully activated, that's where we start the Golem phase, drop the Wizards to create the other side of the funnel so the Archer Queen that has been walking for quite some time will be drawn inwards and not continue to go for a 360 degree walk. Second is to drop the Golems similar to GoWiPe deployment to attract more defenses. Deploy the wall breakers to get through the first layer of Walls. If all of the defenses in the vicinity are targeting the Golems, drop a lone Hog Rider on a defense that isn't in range of any inactive defense. It's a plus since you have 1 less defense to worry about. When the CC troops and Queen are activated, send in the King so it will aggro on the Queen. When the Wizards start to aggro on the CC troops and the Queen, drop the Rage Spell to speed up the process and prevent the units from taking more damage. Drop the Jump Spell so the Golems/Golemites can access different compartments that may contain possible Double Giant Bomb threats. After all the enemy CC troops and Queen are taken out, deploy Hogs on the opposite side. This can be done in two ways.

This type of deployment is to send a couple of Hogs per defense, most commonly used when there are still remaining Double Giant Bomb threats, that way, only a few Hogs will be lost and not a whole pack. When the Hogs start to clear out the defenses, send in more surgical hogs to reinforce the others. Drop Healing Spells accordingly.

A one/two finger drop to send in all of the Hog Riders. This is done mostly by default if 3/4 Giant Bombs are triggered so there will be no more threat on the Hogs. Drop Healing Spells on area with heavy defenses. By this time, all of the defenses must be destroyed by now and drop the Goblin near a cluster of resource buildings so the clean up process will be faster because Goblins deal higher damage against resource buildings. Find a suitable spot where there is an Army Camp so the Archer Queen can be redirected to the path you want since Army Camps take so much space that most of the time, the Archer Queen will be redirected to the direction you want her to go. The purpose of the Golems, Wizards and the Heroes(Much preferred to be called as a kill squad) is to eliminate Double Giant Bomb spots, the Archer Queen and the enemy CC troops. Most suitable against 'anti-3 star war bases' but amount of Hogs may be changed depending on the base setup. Depending on the CC content, it may be sometimes best suitable to save the Poison Spell, if it contains high hitpoint units, let the units do the job since wizards can fry them quickly and save the poison spell for a few Skeleton Traps later. If the cc contains smaller units, use a poison spell on them as they can stall your units for a longer time than a few hih hitpoint troops. Very Important Note: Be sure that you are able to predict the Hog Pathing that they won't be able to trigger a DGB set in a whole pack or else you're screwed. Forced pathing of the Hogs can lead to major disaster and try to angle the kill squad deployment from a logical DGB placement. 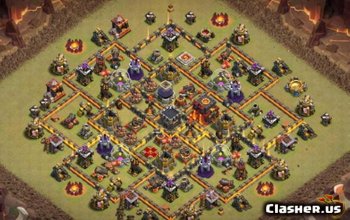 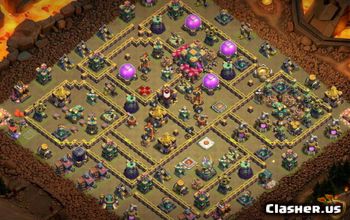 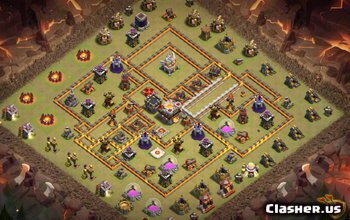 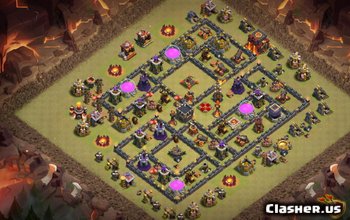 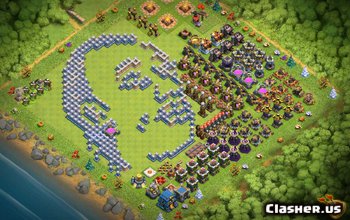 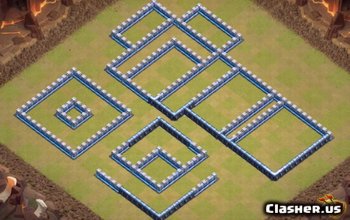 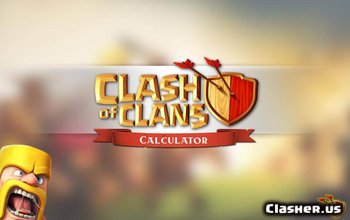 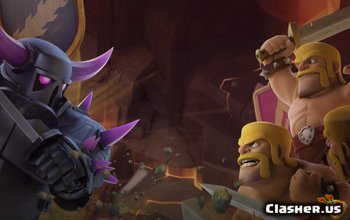 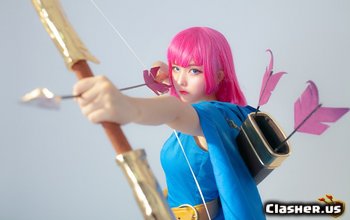 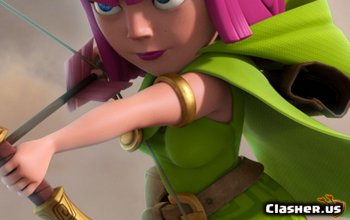 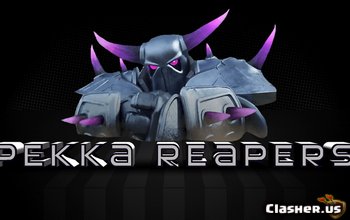 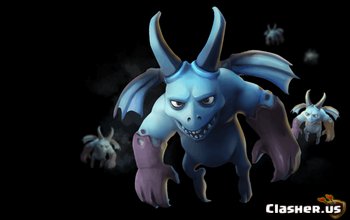 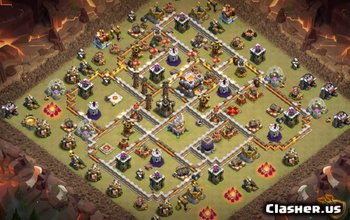 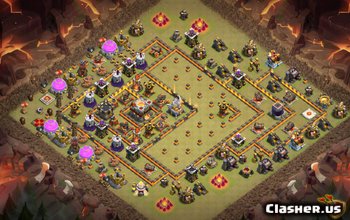 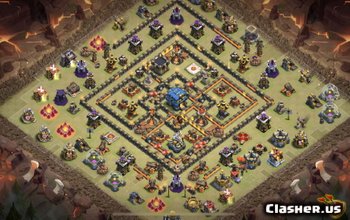 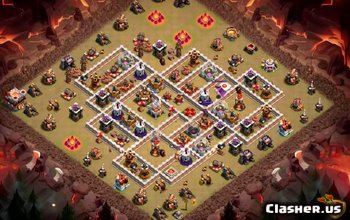 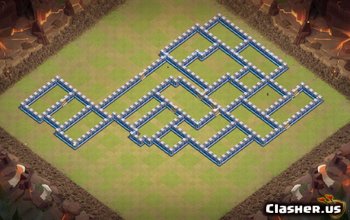