Best TH11 War Base & Trophy Base Layouts - Clash of Clans

Best TH11 War Base & Trophy Base Layouts - Clash of Clans

Away from the fact that you probably won’t make two perfect attacks at Town Hall 11, the more attacks your base costs to defeat, the less attacks the other clan has.

I will show you here a (frequently updated) TH11 War Base and also explain to you why this design works so well instead of listing dozens of different layouts like other websites.

The TH11 War Base Design

Let’s start with the base design for Clan War… here’s the base I really like and used with my Town Hall 11 account in several wars now:

The Town Hall in this base is not extremely exposed, this will help especially in Clan War Leagues when attackers only have one try to 3-Star your base. The Town Hall is protected by an Inferno Tower, double layer walls and several traps to prevent any suicide heroes going for the easy takedown.

The base has multiple regions with one being an outside perimeter with a lot of buildings that just eat time off the clock of the attacker and making him not get the 3-Star in time.

The center is primarily designed to have the Eagle Artillery and the defending Clan Castle from being pulled or destroyed early so the attacker has to deal with it during the main part of his attack.

There are two very popular attacking strategies you will see at Town Hall 11 in Clan War:

Electro Dragons & Balloons Queen Walks combined with Bowlers/Witches or Bowler/PEKKA (called PEKKA Smash) For each of these, this base offers some nice defensive pitfalls that will not make it easy to beat.

The layout is completely asymmetrical and the defenses are also not spread out evenly, forcing the attacker to attack from a specific side depending on his troops.

The outside perimeter is full of storages and mines that will take a lot of time to clear, this is really useful to mess with funneling and make troops a little less predictable for the attacker. There are also Cannons, Mortars and Archer Towers on the outside so the attacker won’t be able to make a cheap surgical Hog attempt against the Air Defenses when attacking with Electro Dragons.

The empty spots in between the base is really effective to make the chain lightning of Electro Dragons less powerful because they won’t jump “over” that section.

They also come in handy funneling Electro Dragons away from the Eagle Artillery and o the sides – if that happens the attacker can just forget the 3-Star and will not get it.

The Inferno Towers are really annoying to deal with because they can target outside the walls while ground troops can’t target them and with the double-wall setups in front of them won’t go inside unless there’s a really strong funnel built.

Also, the Air Sweepers can cover a large portion of the base, especially Electro Dragons and Balloons will hate that because they need spells to overcome the pushback.

So, bottom line this base can be a huge pain, especially in Clan War Leagues when attackers often mirror attack and need to 3-Star the TH11s – and a TH12 attacker using Electro Dragons can easily fail against this base

Now let’s take a look at a base that I have used in my TH11 mini account (yes, I have a lot accounts…)

Got some nice defenses in Champions League with this base and I don’t really recall any opponent that has wrecked this base apart except being a total maxed TH12 bringing everything including Siege Machine – but even that was not a 3-Star I believe.

This base should protect your trophies and your loot – for that reason the Town Hall and the Dark Elixir Storage are in the center while the other storages are spread around the base so the attacker can’t get all of it unless getting a 3-Star, which is pretty hard against this TH11 base.

The Eagle Artillery also has a key position here and can only be reached from the compartment with the Hidden Teslas or the compartments with the Inferno Towers and it’s pretty impossible to surgically funnel any troops, even a Queen Charge, into that position – the attacker will need to go all-in with the Eagle Artillery being active and firing at least 2 full blasts, if not more.

So, let’s see how this base defends against the popular farming attacks that normally are Electro Dragons, Bowlers and Queen Charges.

The air attacks will have a hard time against this base because the compartment with the Hidden Teslas will funnel air troops away from the Eagle Artillery while they take heavy damage and go down early enough.

In general, attackers tend to attack from the back of the base, probably because they want to attack into the Eagle Artillery and also prevent building a funnel on the front side, for whatever reason.

The thing is, the backside is heavily armored by traps and the perimeter will group up the troops well enough so your defenses in the center can tackle them better with splash damage.

You’ll also see that with attacking strategies like mass Miner that normally need a good funnel to break such a base where the attacker rather go suicidal on the perimeter than building a clear funnel.

I think the Eagle Artillery position just scares them off and the compartments around the core funnel them away easily. 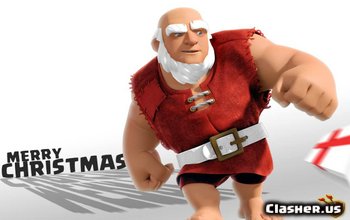 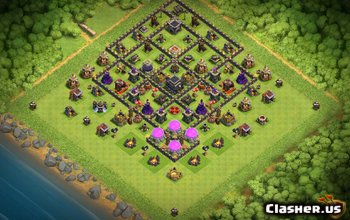 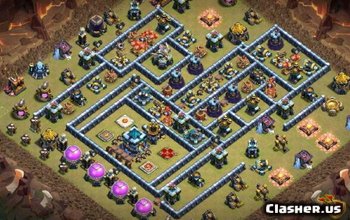 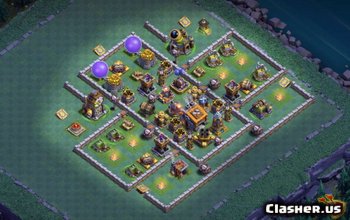 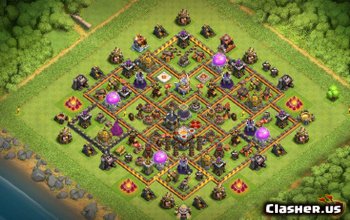